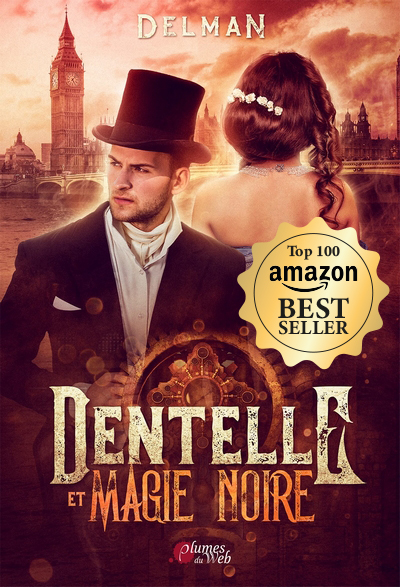 London, 1888. Holy knights roam the country and hunt down anyone practicing magic. In addition, many crimes seem to be connected to Marcus’ arrival on the streets of the British capital.

English countryside, 1888. Between a young woman ahead of her time, almost a suffragette, and a young aristocrat suffering from an age-old curse, it is love at first sight. However, Serena is not yet ready to fall for Marcus, known to be a fickle libertine. However, Marcus has recognized his soul mate at first glance and doesn’t want to be parted from her. He therefore invites her to leave her countryside and join him in London, where she secretly dreams of going in order to meet the great minds of her time.
Along with her aunt as her chaperone, she will be confronted with a new world, in which she will rub shoulders with death on several occasions. Indeed, mysterious forces are at work in the city, and Queen Victoria has declared war on witchcraft. Holy knights roam the country and hunt down anyone practicing magic. In addition, many crimes seem to be connected to Marcus’ arrival on the streets of the British capital. Serena, more and more confused by the attractive young man, will have to investigate.
But is the world really what she believes it to be? Who is trying to have Marcus killed? And why are the holy knights targeting her?

Delman has loved writing since she was a teenager. After studying history and art, she worked in museums and libraries. She did not give up writing though, and subsequently published several urban fantasy novels and romances, such as La tueuse au Katana, published by Plumes du Web.

– Amazon France bestseller since release in “Historical Fantasy”, in “Romantic Fantasy” and in “Steampunk science fiction”.
– A romantic story that fans of the genre will enjoy.
– A progressive plot that keeps the reader on the edge of his seat until the end of the story.
– A new interpretation with a fantastic flavour of Jack the Ripper.
– A rich imagination that rubs shoulders with historical reality.